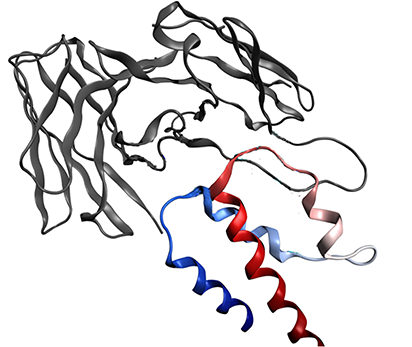 The potent pro-inflammatory complement split product, C5a, is generated upon activation / cleavage of its mother molecule, C5. This activation can occur inside the Complement System as well as by other enzymes, which are primarily not part of the complement cascades. C5a was discovered over 40 years ago and its biochemical and immunological properties have been well described in published literature.

C5a is a key player in many acute and also chronic inflammatory processes, making C5a a highly attractive pharmacological target. However, a special Technology is required to effectively control this target.

C5a is a small 74 amino acid spanning protein (approximately 11 KD) which is known to quickly interact with at least 2 independent receptors (C5aR and C5L2). C5aR has been well characterized as G-Protein coupled signaling receptor, which can be strongly upregulated in almost any tissue and cell, and in different disease settings. C5a therefore displays a short half-life, given the quick interaction with and the abundant number of the binding receptors.

The blood contains approximately 400 nM of C5, which is believed to increase under disease conditions. Thus, a large amount of C5a can be quickly activated from this C5 pool. Interestingly, C5 is not only generated in the liver but also in other epithelial cells like lung cells, and enzymes from phagocytes, e.g. macrophages, have the capability of activating / cleaving C5. Thus, C5a can be generated without any involvement of the Complement Pathways.

In the acute inflammatory response, C5a holds a key player position, being involved as central accelerator or “booster” of inflammation. This role of C5a extents to a broad variety of responses: C5a robustly boosts the generation of many inflammatory cytokines such as IL-8, IL-6, IL-17, TNF-alpha and many more in a variety of cells as well as in the blood stream in disease settings. When C5a binds to its receptors on neutrophils, they are strongly activated and move to the source of damage or infection (this is called chemotaxis), generating oxygen radicals and activated enzymes, both of which are believed to be major contributors to cellular and tissue damage in the host. This central function makes C5a a powerful weapon which, when strongly activated, can promote self-damage ultimately leading to organ dysfunction and failure. 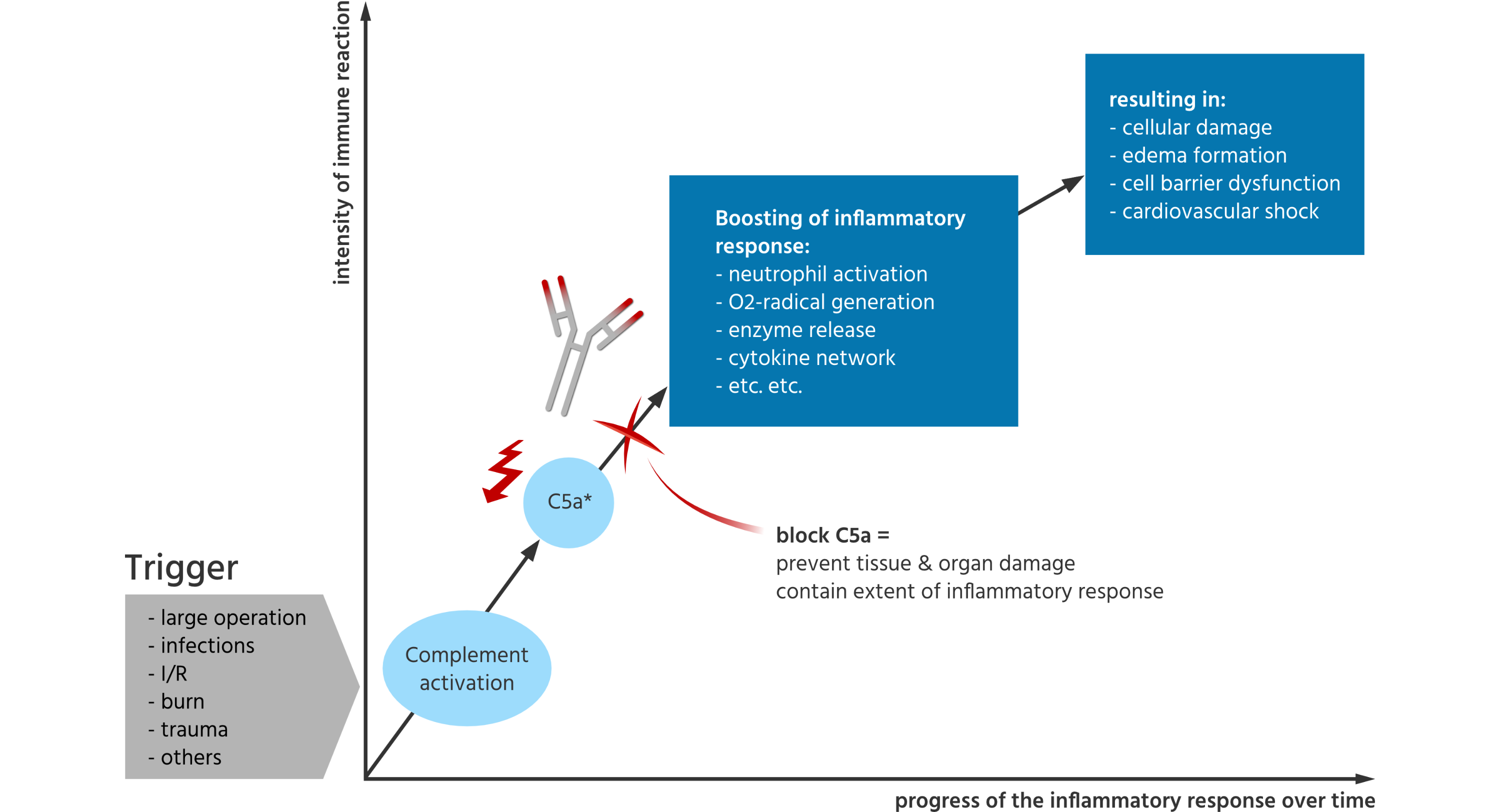 In addition to the above described effects, C5a has been shown to be involved in many other pathophysiological mechanisms, especially on the cellular level: C5a is capable of inducing a complex change in the cell signaling cascade of immune competent cells, like dendritic cells or macrophages, which leads to an altered and often intensified signal transduction of other known signaling stimuli, such as Toll-like receptor signaling, thereby enhancing / “boosting” such secondary signals. C5a also affects T-cell responses and skews a so-called pro-inflammatory Th1-type response, leading to the generation of even more pro-inflammatory cytokines. In addition, C5a is capable of inducing adhesion molecule expression on endothelial cells, leading to more neutrophil adherence and migration and altered endothelial cell signaling with impact on cellular functions. C5a also directly induced the release of tissue factor from endothelial cells, which is believed to be the crucial initiation point of the so-called extrinsic coagulation pathways, leading to blood clotting and associated downstream effects. C5a also stimulates the lipoxygenase pathway of arachidonic acid metabolism, especially affecting neutrophils and macrophages. These and many other functions not depicted here make C5a a central player in the inflammatory response.

The following example illustrates the potent effect of C5a on neutrophil activation. Neutrophils express constitutively high levels of C5aR on their cell surface and belong to the powerful arsenal of our innate immune response. When C5a engages C5aR on the neutrophil cell surface, these cells are strongly activated, generating cell damaging oxygen radicals (the oxidative burst) and release potent granular enzymes. Both mechanisms are believed to contribute to self-damage once the innate immune response is strongly activated.